Let us assume one scenario.

Suppose, you are fond of books. You have different types of books in your collection. Every month, you probably buy three to four books. Then you read those books & place them on the bookshelves. Now, in this way, you find that your bookshelf is filled up with books. There is no place remaining.

But you still have more books to place there. Also, you don’t have the option to increase the space to add more books there. So, what will you do in such a case?

In such cases, you have to make a hard decision. This means you have to remove some books from the shelves. Like some old books or some boring books were removed. Then in that free space, you can add more books. So, you have to maintain the space efficiently. Otherwise, there will be a shortage of space.

The same thing goes for Python delete variable. As a programmer, we need to always perform clear variable Python operations. Otherwise, there will be a shortage of space. After assigning one variable, it is a good practice to delete variable in Python.

Let us know more about the delete variable Python. Then we try to implement a code as an example. That will help to clear the topic in a better manner. 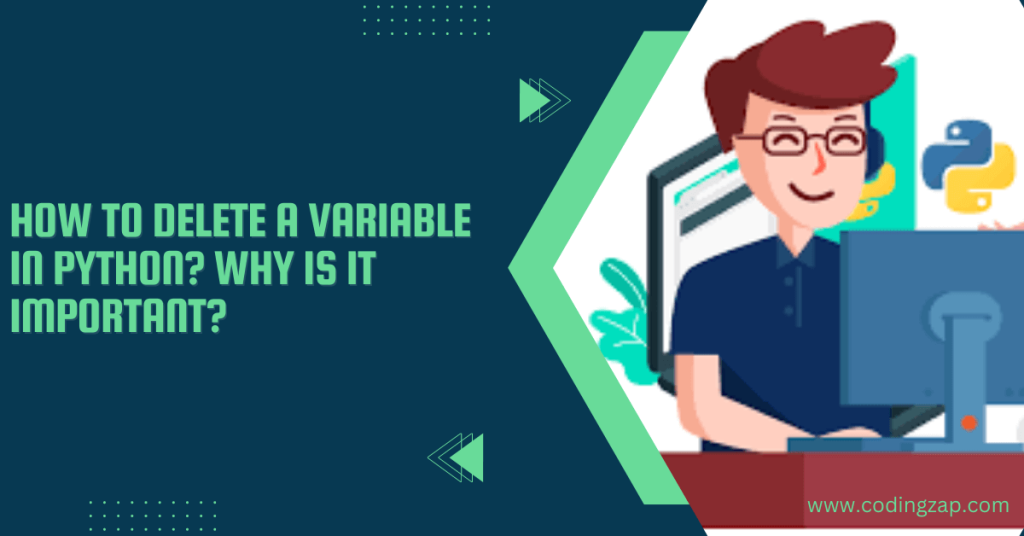 What Is Delete Variable Python? Read Below

Now, programmers declare the variables. After that, they use them. But they don’t remove those variables. Just like every item, variables also consume some part of the memory. In some programming, there is a need to declare a large number of variables. Though they take up a very small amount of space, still they consume. So, it is important to delete variable python after being used. This will help to maintain the memory space.

Why Delete Variable Python Is Important? Get To Know

Delete variable python is very important. In python, the storing of the variable goes differently. The variable is stored in a stack-like structure. And the values associated with the variable are stored in the heap-like structure. Suppose, if another variable assigns with the same value, then that new variable will refer to the value in the heap. There is no need to create a new value for it. So, storing the value in this way will create a serious issue in Python. Delete variable python helps to remove the declared variable from the memory. This helps to remove unnecessary items.

Delete variable Python helps to maintain the space available for Python programming language. If there is a space crisis, then Python programs will not run properly. If programmers want to declare a large list or arrays, then there will be issued. At present, this might be a tiny problem. But when you start handling the Big Data related problems or the Data Analytics problem, then it will play a crucial value. When you start handling bigger projects, there you should clear the memory occupancy.

What Is The Method To Delete Variable Python?

For performing delete variable python, there is a special operation that is already available. There is no need to use any user-defined method. There is already an inbuilt method present. this is known as the del() method. Though, del() is not have any function. But still, this can be used as a function. Simply, programmers need to share the variable names as an argument there. Then the variables will be removed from the memory.

Let us try to find out the output of the above code. It will help to understand the way to delete variable Python.

As we saw, it is very important to understand delete variable python.

Python delete variable helps us to work efficiently with problems related to Big Data. We have to use a clear variable Python approach in Data Analytics & more in the future.

Before going for the delete variable in Python, it is advisable to clear the basis of the Python programming language. As this will help to understand & grab the knowledge in an easy & better way.