Do you know how to use enumerate in Python? Have you ever thought about the process of enumerating in Python? Let’s experience what is enumerated in Python.

But before we start the programming journey, let’s know what is meaning of enumerate is.

Suppose, you are provided a bag of apples. Now, you have asked to enumerate the apples. This means you have to draw out the apples one by one from the bag. As well as you have to produce it. Also, you need to have a count of it.

Now, think about a situation.

If the number of apples is less than five or ten numbers of apples are present in the bag. It will be quite easy task for it but if the number is fifty or hundred? Then, the task will not be so easy.

The same thing goes for Python language also. Now, let’s think about a situation from a programming aspect.

Suppose, in a competitive programming exam, a question is provided to you. You are asked to write a code that can provide you with the number of alphabets present in a string. Also, you are provided a time limit to do that. This means you have to do it by using time complexity theory also.

So, there is no way to run a for a loop & count the alphabets there. Also, if the string is quite long like this “ilovecodingzapplatformmuchasitprovidesanicetutorialplatformforus”. Then it will a problem to find out the number of alphabet present there. As efficiency is also a matter to get selected.

So, what will you do in such cases?

So, in such cases, you need to use enumerate function in Python. This will be a matter of a minute to get the answer to such questions.

But wait, is there any way to get rid of such situations? Yes! There are.

What is Enumerate in Python? Know More

As String or List have numbers of elements present there. These elements are countable. That is why enumeration in Python can apply to those areas only. Generally, it will take a single line to generate the count of the elements. As well as it will distribute the elements with the numbers. This will help to easily find out the elements in a big string.

The Starting-Value is from where you need to start the count. The default value is zero. This means, that if you don’t provide the value there, the counting will start from zero. Then it will go like 0, 1, 2, 3…

In case you need to provide any number there, it will start from there. If you provided starting value as 1, then the counting goes like 1, 2, 3, 4…

In the case of List & String enumerate will provide the output as another List. Then if needed you have to remove the brackets from both sides of the List.

How to Use Enumerate in Python? Read Below

There are mainly two types of methods to use enumerate in Python. Otherwise, there is no way to use such things in Python. Let’s make a list of those methods:

Of these, the first one is the most commonly used method. This method is applicable for both Lists & Strings. But the loop method is only applicable to the List method only.

The second method is quite long. It is advisable to use only the first method. As it will save the time of the program. It will efficiently help the time complexity of the program.

Let’s look at the method one by one. 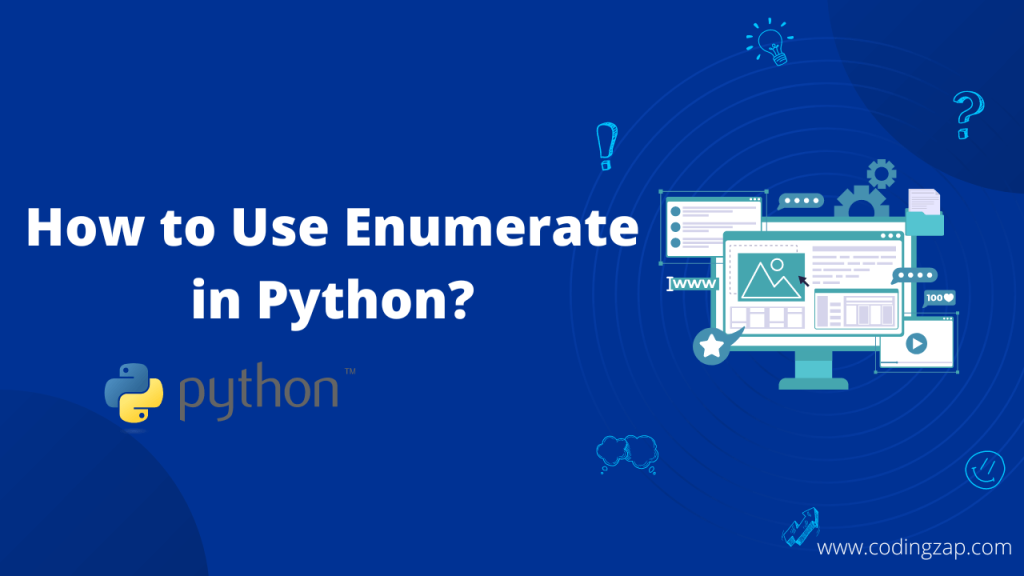 Here first we have to declare a List in Python. As well as we have to provide the elements there. Then we have to do operations on it.

First, we try to provide the output with the default starting value which is zero. This printing & conversation can be done in a single line.

Now, we will look into the procedure for the String.

For this case, we need to declare a string there. We also have to provide value there. Then we will try to do the same case for String also. Here, in this case, also the syntax will be the same. But in place of the List name, we have to provide the String name there.

In such cases, we have to declare a List. As well as we have to provide the values there. Then using a for loop we have to run the List in the enumerate function. This will provide enumerated output in every single line. Here the brackets will also be available at every end of the data.

Also, there is a way to start counting from the new value. The approach for that will also same as the previous methods. 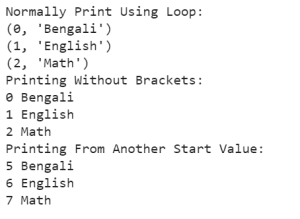 As we saw the enumeration in Python is very important to use.

It reduces the workload related to the fields of String & List.

It counts & produces the elements in the List easily.